Big Media, Big Politics, and Big Business all profit financially and politically when they keep the public worked up in fear and/or outrage. They are not our friends. Let’s take some of their power back with a few facts. The current focus for outrage and fear is the AR-15 and “assault rifles.”

Throughout “American” media, a war is raging over the availability of the AR-15.* Some condemn it as an unnecessary “assault rifle” that is killing our children. There seems to be widespread belief that the AR-15 is an automatic weapon used by the US military. On the other side, many praise it as a fine-tooled machine that is actually far less dangerous than most rifles.

*   It fires .223 Remington or 5.56mm NATO ammunition. These calibers are less powerful than most calibers of ammunition commonly used in hunting rifles.

*   Cartridges are loaded into a magazine, not a “clip,” and the magazine is loaded into the rifle.

*   The AR-15 is considered a starter rifle by many shooters, and kids and adults at rifle clubs often use them for target shooting competitions because they are lightweight, low caliber, and easy to control. 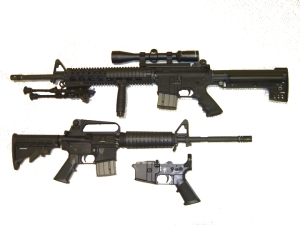 *   The AR-15 has no automatic weapon capabilities.

*   Automatic weapons, which are weapons that fire more than one round per trigger pull, can only be acquired legally in the United States in two ways since the ban of 1986. First, a person can get a special tax stamp that allows the purchase of one made before the 1986 ban, or second, they can obtain a firearms manufacturing license and get a conversion kit to modify a semiautomatic rifle for automatic firing. Both processes are expensive and tedious.

*   The AR-15 is frequently referred to by politicians and the media as an “assault rifle.”

*   The origin of the term “assault rifle” is widely attributed to Adolf Hitler. Hitler used the German word “Sturmgewehr” for propaganda purposes to refer to the Stg44, which was a select fire military rifle used by the German Wehrmacht. “Select fire” means it can be switched from firing one bullet for each trigger pull to firing more than one bullet for each trigger pull. The translation of sturmgewehr is “storm rifle,” or “assault rifle.”

*   The term “assault rifle” has no universal definition and is interpreted differently by each state.

*   There is no special attribute to the AR-15 that distinguishes it as an “assault rifle.”

This is an election year, and the AR-15 is at the center of a propaganda war with much political posturing. We must all keep in mind that just because we might agree with the goal of propaganda, whatever that goal may be, it is still propaganda. In this war of agendas, we are the prize.

We encourage everyone to thoroughly research their topics beyond the click bait and meme fodder of Western media and social media and to remember that conclusions reached in ignorance, whatever those conclusions, only compound the problems.

All the best to all of you as you navigate the Misinformation Highway.

Please Note: This is NOT a gun control post, but rather a post designed to combat propaganda and ignorance. No matter what your opinion is about gun control, please DO NOT share it in the comments.

*We put the word “American” in quotes when referring to media because some of the largest stockholders in “American” media are foreigners with their own political alliances and agendas to push–something to keep in mind when evaluating information.

6 comments on “AR-15 Facts Without Politics”