Based on the best-selling book Horse Soldiers by Doug Stanton, 12 Strong is the true story of the first US Army Special Forces team to go into Afghanistan to hunt down Taliban and al-Qaeda after the 9/11 terrorist attack that brought down the Twin Towers. 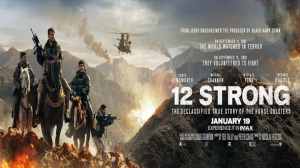 In this dramatization, twelve Green Berets—Task Force Dagger—are ordered to team up with Uzbek warlord Abdul Rashid Dostum of the Northern Alliance in the mountains of Afghanistan to open the way through hostile, mountainous territory to Mazur-i-Sharif.

Once the team arrives and makes contact, they find they must proceed on horseback. Oh, yeah . . . And they only have three weeks to do it. Real life team leader Captain Mitch Nelson pretty well sums it up in his famous response to an impatient senior officer awaiting a report: “I am advising a man on how to best employ light infantry and horse cavalry in the attack against Taliban T-55s [tanks], mortars, artillery, personnel carriers and machine guns — a tactic which I think became outdated with the invention of the Gatling gun.”

A Jerry Bruckheimer production, 12 Strong was filmed in New Mexico in and around Albuquerque as well as in caves south of Alamogordo and on White Sands Missile Range. Chris Hemsworth does a great job as Capt. Mitch Nelson, and he’s backed up with excellent performances from Michael Peña, Trevante Rhodes, and Navid Negahban, who play Sam Diller, Ben Milo, and General Dostum, respectively. Both the armaments and the social challenges the team met with in the course of their mission are faithfully portrayed. And speaking of those armaments . . . bring earplugs. LOTS of explosions.

12 Strong is an excellent representation of what US Army Special Forces concentrate on and do best.

As the film accurately portrays, Task Force Dagger did a great job of quickly inserting into a hostile area, meeting up with indigenous forces, and gaining their trust enough to work together to influence the strategic situation in Afghanistan. Such missions are the bread and butter of the US Army Special Forces.

We would only make one critique of the film’s portrayal of Task Force Dagger.

The movie shows these Green Berets being a bit out of their element with the primitive conditions they found in Afghanistan. In real life, US Army Special Forces are always careful to never, ever appear to be surprised by anything or challenged by any environment, whether that environment is geographic, climatic, cultural, or tactical domain. They will be careful to appear to be absolute masters of whatever domain they inhabit. In other words, they would smile and play poker with Satan and pretend to enjoy the warm weather if they found themselves on a mission in Hell.

Unlike many war movies, 12 Strong addresses the impact war has on the warriors’ families.

Families also suffer and sacrifice. According to Holmes, the hardest thing in the life of a warrior with a family is how their children pay a cost that was not of their choosing. It’s hard for them to wake up and find out that dad left at 3:00 a.m. Eventually, the kids figure out dad isn’t on a beach in Maui, and it leads to the unavoidable fact that families bleed, too, in their own way.

As usual with any movie about military success or heroism on the battlefield, some reviewers who clearly have no experience whatsoever with any battle beyond fighting with their lovers for control of the remote dismiss this movie as “flag waving.” We completely disagree. 12 Strong does a great job of recounting the true story of a handful of brave men who got shit done.