By Piper Bayard and Jay Holmes

Last week, Washington, D.C. shut down due to a threat. No, not a terrorist threat. The threat of snow. 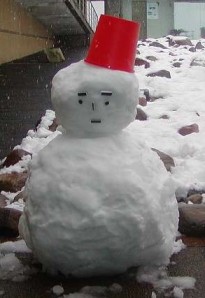 A snow storm predicted to drop 5” – 10” of Frosty’s essence was moving into the area. In the end, Frosty was disappointed with an inconvenient slush. However, Bayard & Holmes, ever on the alert for original ways to make our world a better place, noticed that for a day, things were looking up for our country. For a whole day, the same government that brings us fat-cat banker relief acts, TSA gropes, warrantless searches of American citizens on our highways, and increasingly more hostile political, racial, and religious division actually did no harm to the nation.

In light of that remarkable event, Bayard & Holmes has founded the First Do No Harm Foundation for World Peace. We are currently accepting donations for the purpose of purchasing snow making machines and stationing them at strategic locations around Washington, D.C. Every time the children aren’t playing well together, we will turn on the snow makers to shut them down and give them a cooling off period. Sort of a Congressional Time Out.

But why stop there? We have already contacted the Defense Department about re-fitting retired B-52 and B-1 bombers with snow making equipment that would allow them to carry this peaceful mission to other parts of the world.

What’s that, Kim Jong Un? You say you’re going to send nukes south of the border? One Snowmageddon coming right up. Old Kimy Boy will be enjoying a week of relaxation while he roasts marshmallows in one of his deep underground bunkers. From what we see of Kim ther’s no shortage of snack food in North Korean bunkers.

What’s that, Iran? You want to become the sole Islamic Caliphate and bury the West? Looks like you’re the one buried now. Just to help the Iranian regime enjoy the snow from heaven we’ll sell them some curly toed snow-shoes. And Hugo Chavez? No worries about him. He’s finding out Hell didn’t really freeze over when he was elected president of Venezuela.  Should his replacement thug become too annoying and start financing Colombian terrorists again Caracas residents would be treated to their first snow storm since the last ice age.

This is win/win all the way around. Aging snow bunny pacifists will have delightful new adventure tourism destinations for winter fun all year round, and the military can give the tantruming toddlers of the world the discipline they need. And the best part? Americans will have a training tool to use on our nation’s leaders. Who knows? Maybe we’ll luck out, and Congress will throw a Donner Party. There’s more than one way to trim the fat in DC.