My parents sat us in front of the TV on that July day back in 1969 and said, “You will want to tell your children about this.” We watched Neil Armstrong take the first walk on the moon, not understanding how remarkable it was, but thinking it was incredibly cool just the same.

Our young lives were filled with Tang and Quisp and astronauts, and since each generation believes the world springs fully formed at the moment of its own birth, we took the moon walks for granted. After all, they happened every few months, and at our age, there wasn’t really a time before. We were certain people would be living on the moon by the time we were adults, using it as a base to explore the rest of the solar system.

And Star Trek? Why not? Even Russians and Americans eventually set aside the space race fueled by the Cold War and shared the International Space Station. Space wasn’t only the final frontier. It was the place where humans stood together in the face of the unknown Universe. The very essence of Star Trek made real.

I am only now fully feeling the possibility that there will be no more moon walks in my lifetime. In fact, I’m fond of saying, “We put a man on the moon with a slide rule. Why can’t we do it again with all of these computers? I’m not seeing any improvement here.”

But Neil Armstrong and the other brave astronauts of those years planted a seed in the minds and hearts of humanity that not only stands for the wonders we can find in the night sky, but for what is possible here on earth. My parents were right. I do point to that moment and tell my children, “Anything is possible if we choose to make it so.” 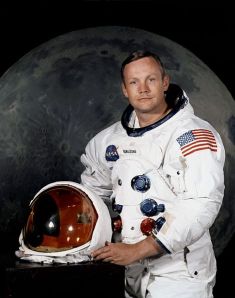 All the best to all of you for keeping the fire burning.

28 comments on “One Small Step for Man, One Giant Leap for Dreamers”