Okay. I’ll Do It. I’ll Run for President.

By Your Next Commander in Chief, Piper Bayard

I don’t know about you folks, but I’m pretty disappointed in the self-serving, corporate-driven hairballs our political parties are coughing up for us these days. It’s always been my contention that, if you’re going to complain about how someone does their job, then you’d better be ready to get off your duff and do it yourself. So I will. Yes. I’m running for president.

Know up front that I refuse to affiliate with any political party. Ultimately, they are all more loyal to themselves than to the American people. The only party I will be a part of as your president is the Inaugural Ball. And since I am a dancer, I would be happy to provide the entertainment for that event in order to save you, the taxpayers, money.

As for my campaign, I am not asking for your money. I’m guessing in this economy, you need it. So how will I run? Social media. If Facebook and Twitter can make Betty White an icon among today’s teenagers, it can get me to the White House.

Know that as your president, I would not expect any remuneration beyond actual college expenses for my two children. . . .  Oh, wait. The annual $180k that the president makes would be less than that. NVM. I will happily accept the lesser amount.

Also, as your president I won’t spend your millions on my family vacations, and I will continue to shop the sales at Eddie Bauer and Dillard’s. I won’t even take the silver and furniture from the White House with me when I leave. That’s been done.

Along those lines, I will also not redecorate the White House with your money. (Unless I find some gaudy animal print lurking in an obscure corner. That will have to go.) However, I will certainly fumigate all locations where our current president smokes while tacitly approving schemes to ban the asthma inhalers people need to stay in the same room with him.

The pillars of my platform are encouragement of personal responsibility, the rooting out of corruption, and a good smack upside the head for all whiners who won’t shut up and get busy making this world a better place.

So let’s get the touchy stuff out of the way, shall we?

Baseball. Baseball is a forward-looking religion with no dogma and lots of hope. We adherents know that, with the last swing of the bat at the end of the season, spring training is just around the corner. People of all faiths are welcome at baseball games, as long as they behave and treat their neighbors with respect. If they don’t behave, they will be relocated near the bullpen to be used as targets for pitcher warmups. 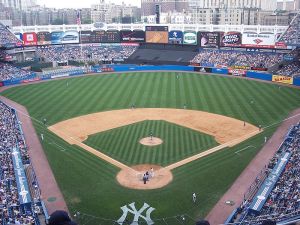 The Cathedral of My Religion, image from Wikimedia Commons by “The Silent Wind of Doom.”

Yes. I have one. It is extensive and colorful. I learned a great deal because the person who is the same at 50 as they are at 20 has wasted 30 years. I’ve made exceptional use of my time. So you media folks just come to me. I’ll give it to you straight. And remember, great things grow in dirt and manure.

As an added bonus, unlike the current leading candidates, I am happy to release all of my tax returns, my school records, and my legal birth certificate, along with all of my fake ID’s from my youth.

Yes. I have one of those, too. It ranges from small towns to urban centers, and from the bread and cheese line to law school. In other words, I’ve got both papers and street cred. I’d say “I feel your pain,” but that one’s been done, too.

I am not for sale to banks. I do not borrow money from the Chinese to give to my enemies. My retirement plan is not a Ponzi scheme, and to the best of my knowledge, I have successfully prevented trespassers from living in my home. That puts me ahead of our collective government right there. And no. I have never been president of my local PTA. However, I do manage a successful kingdom on a virtual reality game.

My stand on abortion:

I fully support retroactive abortion for all jihadis and skumbag phone solicitors. (I favor rehabilitation for any honest phone solicitors who are just trying to make a living like the rest of us.)

My stand on gun control:

I am 100% in favor of controlling guns. Aim and make every shot count.

As for my cabinet appointments, I don’t give a rat’s touchas about anyone’s race, religion, species, etc. I only care if they are best qualified for the job. I will not sell out my country by pandering to special snowflake organizations and appointing their love children to positions of influence.

I will appoint my writing partner, Intelligence Operative Holmes, Secretary of Defense. He has the experience and the moxie for the job, and he, like me, loves America more than he loves corporations, power, or money.

Since Holmes can’t be identified, I will recruit George Stephanopoulos to sit in his chair at all meetings. That’s because George has experience, and he’s hot. Seriously. It makes no sense to me, either, he just is. And if Stephanopoulos is not available, I will simply stand up a cardboard cutout of George Washington. Never hurts to have a little Founding Father action in the government process. Holmes will still be in the meetings, but no one will know if he is the guy in the general’s chair or the guy serving the sandwiches.

Yes. Sandwiches. Refer back to my stand on expenses. They can be paninis, but no steak and lobster bisque at the taxpayers’ expense unless we are hosting foreign dignitaries.

All internal disputes will be settled with dancing competitions so if you’re interested in applying to be my vice president, start practicing your moves. Carrie Ann Inaba will screen all applicants. But please understand, my first choice for vice president is General Colin Powell. Do not take that as an evaluation of either your dancing skills or his.

While I am president, Congress shall make no law that it does not, itself, live by. “Leaders” who are not subject to the laws they make are not leaders, they are rulers. There is no place for rulers in America. Any Representative or Senator who demonstrates behavioral issues will be sent to The Slapping Medicine Man.

As your president, my first and only loyalty will be to you, my fellow Americans. I have no other mission or interest but to strengthen this country and her people. So let’s all come together and prove that America really is still a country by the people, and for the people, and that our presidency does not simply go to the highest bidder. Tweet, blog, Facebook. Hey. It happened for Betty White.

You will find my stand on the issues below. I now open the floor to your comments and questions. One at a time, please. No pushing or name calling, and don’t say anything you can’t say in front of your mother. (My policy for press conferences.)

To join in the discussion, see Okay. I’ll Do It. I’ll Run for President over at Bayard & Holmes.

Piper for President — Doesn’t Take Crap. Doesn’t Dish it Out.

My Stand on the Issues

For decades, America has been Simba the Lion masquerading as Pumbaa the Warthog in an effort to “win hearts and minds.” No one respects a lion pretending to be a warthog. I say we’re in it to win it, or we stay home. The hearts and minds will follow. America is a lion with claws and teeth and courage. It is not a dancing, singing, farting warthog.

I have excellent reason to believe that the majority of the problems in the Middle East are caused by gender disparity. Since the Middle East has a dearth of women and an overabundance of men, and Latin American countries have more women than men, I would recruit Latinas to relocate. They would have an excellent mellowing influence, and they would foster some fantastic fusion restaurants. See How Latinas Can End Jihad.

As much as is possible, I will replace welfare programs with work programs, because imitating a kennel dog waiting for its dinner develops bad habits and is damaging to the soul. I have been unemployed, and I have received government cheese. While it’s the tastiest cheese ever, handouts are far more depressing and demoralizing than honest work of any kind. 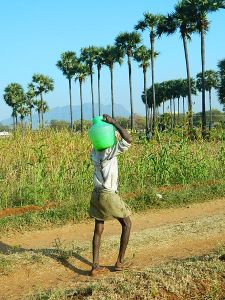 I will dismantle the Department of Education. Instead, I will use the nearly $100 billion it wastes every year to build more schools, hire more teachers, and provide an Educational Exchange program for troubled youths. In this exchange program, any “troubled youth” who would rather be a thug gangbanger than take advantage of the privilege of going to school would be sent to a third world country in exchange for a disadvantaged child who only dreams of getting an education instead of walking five miles every day for a bucket of water.

America is our home. I will show the utmost hospitality to those who ring our bell and are willing to wipe the dirt off their feet before they enter.  Trespassers will not be welcomed with open arms and open wallets. However, they are welcome and encouraged to apply for the Educational Exchange program.

I will rewrite Obamacare in a way that serves the public rather than special interest groups and insurance and pharmaceutical giants. I will also set up a hotline for reporting each and every fraud that is perpetuated by a medical culture that thinks it has won the lottery every time someone with insurance walks through the doors of an Emergency Room.